David Spade is the youngest of Wayne Spade and Judy Todd’s three sons. He grew up in Scottsdale, Arizona. His brothers are Bryan Spade and Andy Spade, CEO of Kate Spade New York. David is the brother-in-law of famed designer Kate Spade. Wayne Spade abandoned his family when David was six. Judy Todd eventually remarried, but David’s stepfather committed suicide in 1980 (David was 15 years old at the time).

David Spade went to Saguaro High School, graduating in 1982. In April of 2006, The Sabercat, the school’s paper launched a story on alumni of the school, including a small section on Spade. He graduated with a degree in business from Arizona State University in 1986 and is a member of the Sigma Alpha Epsilon fraternity. Other famous SAE alumni include former President William McKinley, golfer Bobby Jones, actor Fred Savage, and recording artist Nick Lachey.

David, encouraged by friends to pursue a career in comedy, joined Saturday Night Live in 1990 as a regular cast member and writer. Here he made popular his well-known sarcastic, smart aleck character in a number of skits, some of which include: a flight attendant who bids an unpleasant “Buh-Bye” to each passenger as they deplane; a receptionist for Dick Clark who, as a matter of policy, asks even the most recognizable face “And you are?”; and, most famously, the bitingly sarcastic Hollywood Minute reporter who assaults celebrities with a series of one-liners.

This particular role won him both acclaim from the public and scorn from celebrities—perhaps most noticeably from fellow Saturday Night Live alumnus Eddie Murphy when David did a joke in which a photograph of Murphy, whose career had started to falter, was shown, and Spade quipped, “Look children, a falling star… Quick, make a wish.” In a Spade in America sketch he received a tattoo of Calvin from Calvin and Hobbes from Sean Penn. He also impersonated celebrities such as Michael J. Fox, Kurt Cobain and Tom Petty.

David also has a successful movie career highlighted by his work with fellow Saturday Night Live cast member Chris Farley. His movies, such as Joe Dirt, Grown Ups have been commercial successes. In 1997, Spade reprised his role as a sarcastic receptionist in the television series Just Shoot Me.

He voiced characters on several episodes of Beavis and Butt-head, and produced his own TV series Sammy in 2000. He has also appeared in recent commercials for Capital One, with Nate Torrence where he plays the employee of a fictional rival company whose policy toward honoring credit card rewards is “always no.” In 2004, he joined the cast of 8 Simple Rules, following the untimely death of the sitcom’s star, John Ritter.

He is currently the host of a new Comedy Central show, The Showbiz Show with David Spade, which began in September 2005. On the show, Spade makes fun of Hollywood and celebrities in a manner similar to his old “Hollywood Minute” segment on SNL. 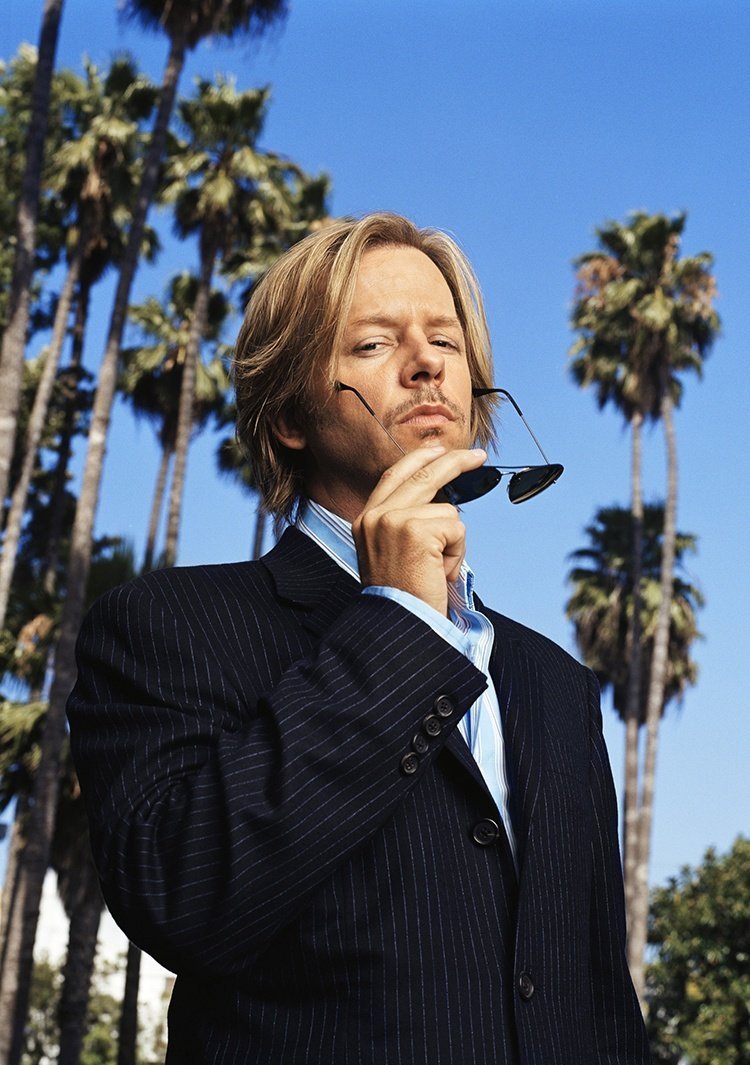